Learn how governments work together to acquire land for and build a multi-use path. 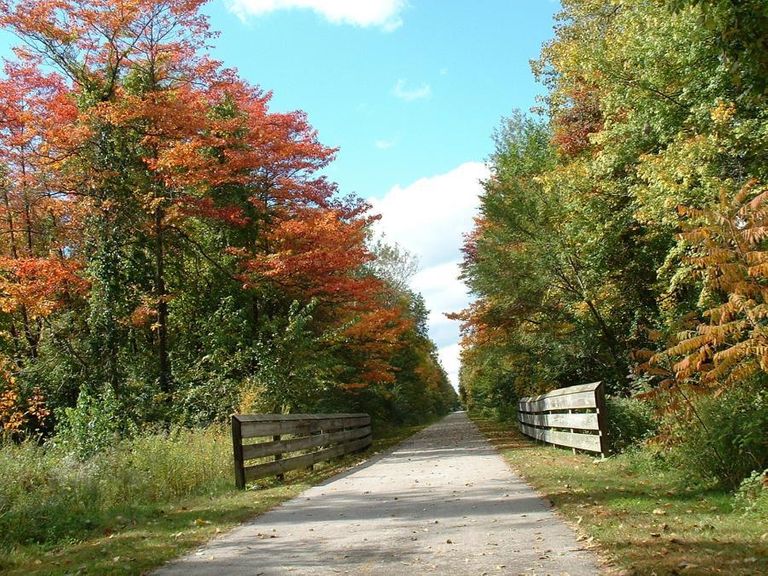 Twenty-six years ago, TMACOG worked with partners to acquire the railroad line right-of-way that became the Wabash Cannonball Trail, one of our region’s first rails-to-trails projects.

TMACOG acted as the coordinating partner between the entities that would own the trail. The trail owners are the City of Maumee, Lucas County, Metroparks Toledo, Village of Whitehouse, Northwest Ohio Rails-to-Trails Association (NORTA), and the City of Wauseon.

There is potential for the Toledo region to be in the middle
of a one of the largest multiuse trails in the country.

The Wabash Cannonball Trail also serves as a key piece of the North Country Trail, which is a 4,600-mile trail that rolls from North Dakota to Vermont. The Wabash Cannonball is also part of the proposed U.S. and State bike route system in Ohio. The Wabash Cannonball North Fork will be part of State Bike Route 90. (See information about the State Bike Route here.) There are also a couple of trails on both the east and west sides of the Wabash Cannonball. To the west is the Pumpkinvine Nature Trail ending in Shipshewana, Indiana. There is potential to extend both trails sometime in the future to make them meet. To the east of the Wabash is the North Coast Inland Trail. It is in TMACOG’s long range plan to connect those two major trails. The North Coast Inland Trail currently goes from Elmore to Lorain. There is potential for the Toledo region to be in the middle of a one of the largest multiuse trails in the country if all of the connections are made.

TMACOG staff are working a combination of in-office & remotely. Email is the best way to contact staff. Masks are welcome but not required when visiting TMACOG’s office. Please check our meeting calendar to see if the meeting is virtual, in person or a hybrid.
CONTACT US FOR MORE INFORMATION

The historic bipartisan $1.2 trillion infrastructure bill passed on November 5, 2021.
The bipartisan bill includes $550 billion in new investments in roads, bridges, broadband and more. It is widely expected to create a lot of jobs.