River cleanups are great and useful community-building events, but it would be even better if trash was kept out of our waterways in the first place. 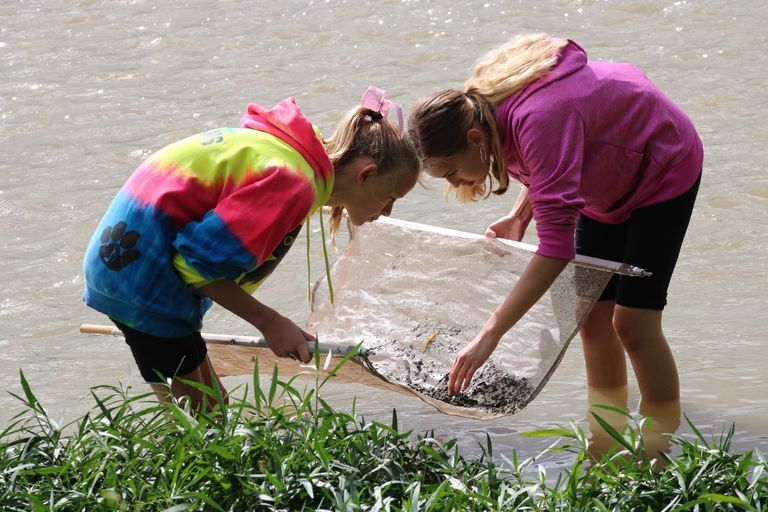 The team hopes to install boxes or nets at four or more locations representing different land uses: industrial, commercial, recreation/tourism, and residential. Locations will include the Ottawa River, Maumee River, and Swan Creek where it flows into the Maumee in downtown Toledo.

Edith Kippenhan, senior environmental scientist with the City of Toledo, is managing the program. She said, “A trash capture device is generally a floating box with booms that guides the trash into the box as the water moves it downstream. The devices can be small or large, skinny or wide.” Examples of the devices are Water Goats or Bandalong Litter traps.

Another trash collecting tool that will be used is an outfall net – a net attached to a large, round steel clamp – that can be mounted on the end of a stormwater outfall. Because lots of trash is transported by rainwater and snowmelt through the storm sewer system and thereby to rivers, attaching a net at the end of the storm sewer outfall pipe captures the trash and keeps it from entering the river.

Partners for Clean Streams will be working to keep trash out of the storm sewer system in the first place, and will also provide public education about the project. The University of Toledo will analyze the amounts and type of trash captured at the different locations to learn more about effective ways to prevent litter.

TMACOG staff are working a combination of in-office & remotely. Email is the best way to contact staff. To access log-in information for all TMACOG meetings and teleconferences, visit the meeting calendar.
CONTACT US FOR MORE INFORMATION

The Treasury Department is Delivering COVID-19 Relief for All Americans