The 2020 Caucus sessions discussed the digital divide, how to use federal relief funds, and how to maintain service to the population during a pandemic. 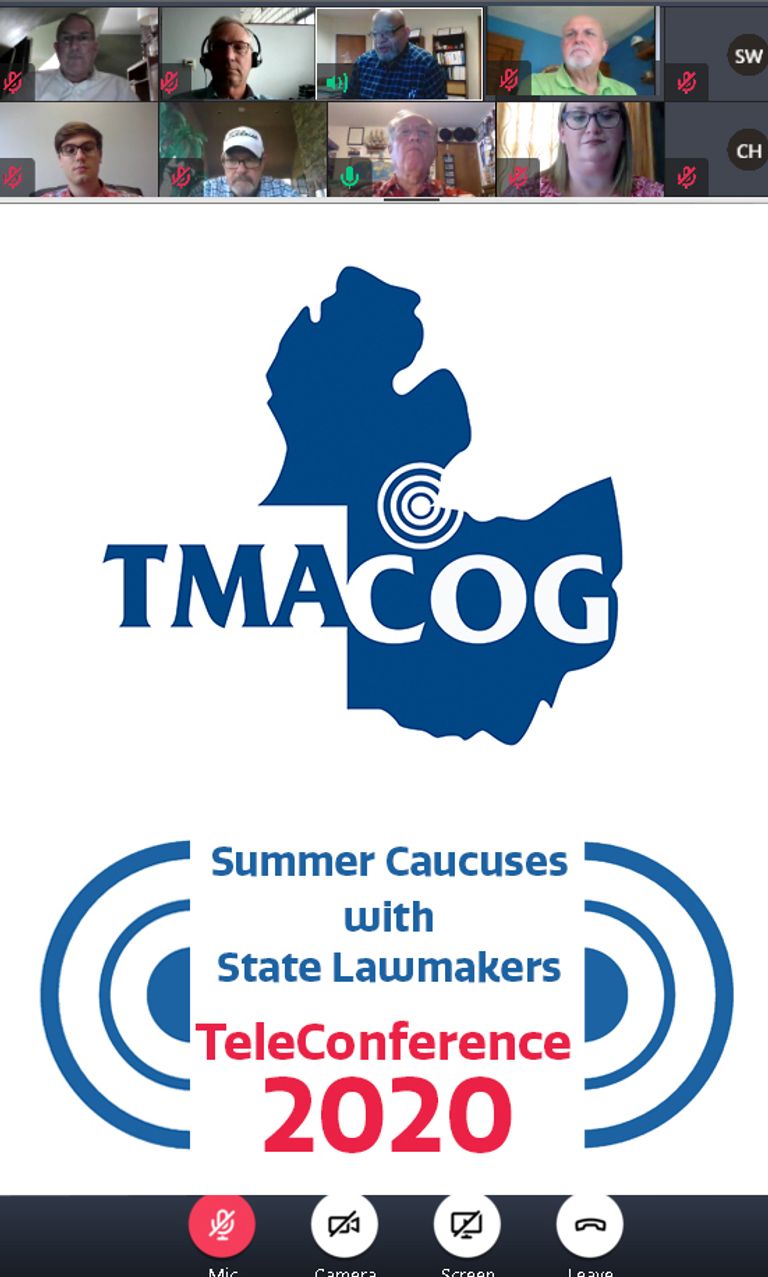 The annual summer meeting of TMACOG members was held as a series of teleconferences July 28 and 29. This format allowed members to attend as many of the seven sessions as they were interested in. Many people took advantage of that option. While there was no separate panel discussion with state elected officials, many officials or their representatives did attend and participate in individual caucus sessions. Scroll to see each summary.

Responses to the pandemic dominated member discussion in all caucuses. Municipalities, special districts, schools, and non-governmental members have all had to abruptly realign priorities in response. Most governments report increased interest is government activities and increased public participation through teleconferences. Members attribute new interest to more free time, and the ease of logging in to watch a meeting.

About 43 people logged in to the Counties TeleConference 2020 including six state elected officials or their representatives, 12 county commissioners representing Wood, Ottawa, and Sandusky counties, county engineers, and ODOT representatives as well as mayors, appointed officials, and consultants.

Discussion about the pandemic included a review of best practices that have been adopted including integration of social distancing and protective measures into office work. Most people reported that quality of work and public services have been maintained through quick adoption of remote meetings and other communication technology. While person-to-person meetings are preferred, most agree that remote meetings need to continue as an option going forward indefinitely. People have realized that remote meetings have advantages including increasing public oversight and allowing participation from people for whom travel is a challenge.

Counties are developing systems to manage CARES funding to ensure that available funds are spent and documented properly.

Revenues are somewhat down after a very strong first quarter, but all parties to the caucus expressed great concern about 2021, citing unemployment and anticipated drops in tax revenue and utility payments. Gas tax revenues are way below expectation because people drove much less between March and July. Jurisdictions were counting on that funding from Ohio’s increase in the tax rate.

The counties had a robust discussion about Lake Erie including nutrient reduction efforts and current high water levels which are affecting all counties abutting Lake Erie. H2Ohio funds will assist farmers in nutrient reduction and also provide some wetlands which should help with coastal flooding. Elected officials and engineers are also interested in supporting the Great Lakes Restoration Initiative and restoring a water and sewer rotating loan program.

About half of the 33 people who attended the Cities Caucus were city council members, mayors, and appointed officials. The other half included state elected officials or their representatives, consultants, educators, and ODOT and turnpike representatives.

Similar to the discussion among County representatives, city representatives said that revenues are flat or only slightly lower due to a strong first quarter but expected to drop for the rest of the year and in 2021. Services to constituents have been somewhat impacted due to efforts to protect city workers through remote work. Cities have adjusted by setting appointments rather than having walk ins, using more electronic communications, and setting up drop boxes for payments and correspondence.

A discussion about policing covered difficulty recruiting new officers, best use of body cameras and CCTV, and building relationships with citizens exercising their rights to protest.

Recycling is becoming a big issue in cities as costs rise and fewer items are accepted for recycling.

State legislators invited elected and appointed officials to contact their offices at any time to request legislation, for advice on existing funding options, or for letters of support.

About 27 attended including village administrators, mayors, and consultants.

The group began by discussing HB 41 which provides funds for direct and indirect expenses due to the COVID pandemic. Members of the caucus discussed their understanding of what expenses were covered. Some options include payroll, technology for remote work, and capital expenses such as touchless doorknobs, faucets, and drinking fountains. October 15, 2020 is the deadline for spending and documenting the funds.

All villages are looking at options to reduce expenses anticipating drastic loss of income. Some are cutting office hours. All have most staff working remotely using their own technology. Some services have been curtailed as staff take steps to stay healthy. With small staffs, there is a concern about maintaining service if some workers are ill or need to quarantine.

The usual village concerns were discussed: tree trimming, brush pick up, sidewalk repair. While most villages require that property owners repair sidewalks on their property, the Village of Archbold treats sidewalks as shared transportation infrastructure and fixes sidewalks with tax dollars.

Remote work has brought the issue to the forefront of paying taxes where you work rather than where you live. Now that people are working at home, there is new interest in changing some of those laws. People who live and now work in villages resent paying taxes to say, Toledo, when they are not using city services anymore.

About 15 elected officials attended the Townships Caucus. Major concerns of attendees included how to support local businesses including by waiving some regulations regarding signage and parking. Elected officials responsible for managing CARES act funding shared what they have learned about documenting expenses and allowable expenses. Those funds have made a real difference to small townships and those which have not applied are encouraged to do so. Joint Economic Development Zones have also proven to be an asset for townships.

Some officials noted that there is an uptick in interest in township activities including more people attending online trustee meetings and making zoning complaints. Teleconferences are seen as an asset, increasing participation and transparency while making access easier for people with internet connection. Not everyone benefits because not every household has effective internet service.

An update to House Bill 539 relates to township police authority although not all townships have a police force. There is concern about the ability of township police to enforce speed laws on state highways. There was also discussion about professional training for local forces.

State elected officials attending the meeting discussed a bill that would ensure that H2Ohio dollars cannot be diverted from that program.

About 40 people attended the Schools Caucus representing universities, elementary schools, and junior and high schools. Several state officials or their representatives sat in. All levels of schools are starting the school year in the fall with a mix of remote and in-person education. There is a lot of concern about transportation (buses) and living in dorms. Some districts are able to increase the number of buses to have fewer riders on each. Face coverings will be required on most buses although educators recognized that it will be a challenge for the youngest students.

BGSU is exploring the use of apps that will require resident students to complete a questionnaire each morning about their health status. The aggregated data will help school leadership make decisions. Several different apps were discussed.

Educators are very aware that the economy will not recover until parents can get back to work, and that work and school will be difficult if the pandemic is not under better control. All plans are considered tentative, based on levels of infection going forward, vaccines, and what is learned about transmission particularly between children and between children and their families at home.

Schools are concerned for the health of teachers and staff as well as for the students. There was general discussion about cleaning protocols, maintaining social distance, staggering time in the hallways.

This caucus includes businesses, consulting firms, chambers of commerce, utilities, and advocacy groups. About 25 individuals were in attendance which is a higher turnout than in previous years.

Most of the discussion involved how to maintain or restore effective business practices during the pandemic. Businesses are investing in new WiFi, monitors, and computers to facilitate remote communication.

More remote working has led some employers to consider making work from home or a remote location a regular or even preferred option going forward. Fewer employees on site could mean less real estate cost and also greater flexibility in hiring people from out of the region. There is concern about how to manage employees who come in contact with an infected person. Does a person in quarantine get paid if they cannot work from home? Is that fair to people who can work while away from the office?

Retail stores are going to struggle to recover their customers. Additionally, store owners will need to enforce safety protocols which may drive customers away.

The pandemic has brought the “digital divide” to the forefront for this group of TMACOG members. Virtual meetings have been useful for the Northwestern Water and Sewer District but don’t reach every client or interested person. Many rural areas have very poor internet infrastructure. There was discussion about a statewide broadband infrastructure plan.

The public library provides internet access for a great many people who don’t have that service at home. The Toledo Lucas County Public Library reports that cars have been parking near closed library branches just to access the internet. Most branches are closed to the public although some curb service and electronic services have been added. The library has applied for FEMA assistance and Shared Work Ohio funds to help with payroll and other costs of being closed for so long.

The pandemic has had a drastic impact on public transit. TARTA ridership is down 65 to 75 percent. TARTA and other transit agencies are losing revenue while expenses are increasing. All drivers have stopped collecting fares to reduce interaction with riders. TARTA is planning how to provide service to the new Amazon center under development. Both TARTA and BG Transit have applied for CARES funds to maintain their essential service.

Metroparks Toledo has seen visitor traffic surge up to 60 percent above the same time last year. Parks remain open but offices are closed. There is a lot of concern about maintaining restrooms and playgrounds. Keeping parks and trails open depends on people maintaining their distance from each other.

All TMACOG staff are working remotely. Email is the best way to contact staff. To access log-in information for all TMACOG meetings and teleconferences, visit the meeting calendar.
CONTACT US FOR MORE INFORMATION